Ho Chi Minh – Can Tho

At my first full day in Vietnam I traveled from Ho Chi Minh to Can Tho where the volunteer projects are. The organisation already arranged a ticket for a minibus for me. It was a relaxing 2.5 hour drive, the bus was highly equipped and even had massage chairs! The luxury was in outright contrast with what I saw outside. People having dinner on the streets on small plastic chairs and chaotic traffic where everyone just horns and traffic rules aren’t really obeyed (I don’t know if they even have much rules).
Although these things may sound very unorganized and unpleasant. In these first days I came to know that it’s not as bad as it looks. Traffic is chaotic, but people always remain friendly and everyone anticipates on eachother to avoid collisions. I feel completely safe driving through traffic on my bicycle now.

Somewhere in the afternoon I got to the appartment where all volunteers stay. It is a big appartment with 3 floors and 4 bedrooms. There are currently 5 other volunteers staying in the house. They gave me a warm welcome and showed me everything in Can Tho. 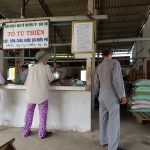 The kitchen at the Charity Hospital

The day after I arrived in Can Tho, I had to get up at 8:30 for my first project. There already was a bicycle for me at the volunteers house. So together with two other volunteers I went to the Charity Hospital nearby. This is a small hospital that uses traditional medications and is ran by local volunteers and monks. When we arrived we where invited to have Vietnamese breakfast with the monks. Vietnamese breakfast is rice with a lot of warm Vietnamese snacks. I’m not used to eating a lot in the morning, let alone eating warm food while the temperature is 30C.. But, I did try everything and it was nice!
Not long after we finished breakfast, we served the hospital patients and their families rice and vegetables. After serving the patients we went to a local market together with two monks. We where going to collect food for the hospital. People from the market give food as a gift to support the hospital. 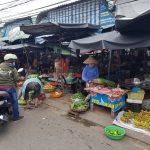 The monks handed us large bags with a mark of the hospital, so the market people knew for which cause we where collecting.
We got our bags filled with vegetables and rice and hopped back on the mopeds to return to the hospital. While we drove back we got suprised by a nice Vietnamese rainshower. I actually liked it. It was kind of refreshing! Back at the hospital we helped a bit with cutting the vegetables and got to eat some Banh Xeo (looks a bit like a pancake with vegetables). Also very nice!

Trip to the waterpark with City Orphanage 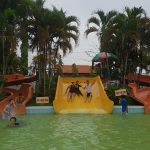 One of the other projects is helping at the City Orphanage. This is a home where mainly disabled people are living and being taken care of. They are divided into 4 groups: children, men, women and babies. I was lucky and started my first day with something fun, a trip to the waterpark with the children. The trip was sponsored with money that one of the other volunteers had collected. It was touching to see how much fun this gave the children. 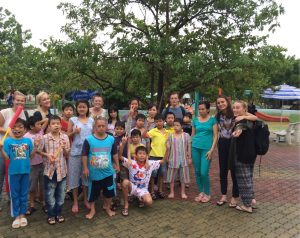 Waterpark with children of City Orphanage

Teaching English at Thien An

In the early morning on my second day in Can Tho, I gave English lessons to a class of 10 children at Thien An orphanage. Thien An is a home for kids of which the parents couldn’t afford it to give their kids a good life. The orphanage is located just outside Can Tho in forest like environment, the route to this project is a gorgeous one.
In our English lessons we tried to learn them some words by pronouncing the words and playing hangman with them afterwards. There are some kids that are eager to learn and some of them are really easily distracted. This makes this project a bit of a challenge. 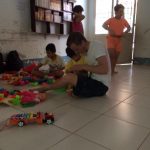 Playing with the kids at City Orphanage

For the City Orphanage project I visited all the four groups (children, men, women and babies) with one other volunteer. We started at the children. We brought two bags with toys from the volunteers house for the kids to play with. Again it was really touching to see how happy these children are with our visit. I think I’ve been hugged over a thousand times already. I think the children had a great time. The other volunteer even got to teaching a couple of English words to one of the kids, amazing!

Next up where the men. I was already warned by the other volunteers, that it could be really confronting. And yes it was confronting.. At the mens section most of the men lie or sit on the ground seemingly without knowing where they are. Also the bad smell in this section is one I won’t ever forget. Our job is to bring some joy where possible and help feeding the men, as they’re unable to eat by themselves. This part of the project was hard, it was also really difficult to get contact with most of the men. 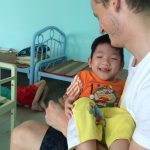 One of the kids in the women section of City Oprhanage

After that we went up to the baby section. Doing the babies section as last one is really good to finish with a good feeling. A room full of lovely babies and one adorable little playful girl really makes your day. Unfortunately also at the babies there are a couple of bad cases.. There is one baby with a waterhead with the size of a watermelon. As I understand, the baby has lot of pain which is surpressed by paracetamol, but there is not enough money to keep giving him that for a long time..
Theres also one baby that is infected with HIV, luckily this girl doesn’t seem to suffer from it right now. All together, the babies section is a happy and hopeful one. Now and then babies get adopted and hopefully will be offered a better future with loving parents. Not long ago one of the babies got adopted by a couple from Montreal Canada.

This Sunday and Monday we’ll be going to a homestay in Vinh Long. Later more about this trip on my next blogpost. Have a good weekend everyone!